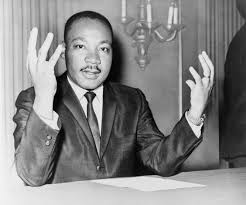 While the city of Denver celebrated Martin Luther King Jr. Day in usual fashion, a protest also sought to honor the civil rights leader with calls for action.

Politicians and religious leaders from the community both gave speeches about the legacy of King’s message. Then, as tradition dictates, they parade-marched, or as they refer to the event “marade.” The procession began at E. Colfax Ave. at Columbine and stretched to W. Colfax and the 1400 block of Bannock St.

The preceding commemoration took place before a crowd of 1,000 gathered at City Park. There, Governor Jared Polis and Mayor Michael Hancock addressed the crowd, honoring King. “Today as we leave this platform, let’s go with a purpose for the 3-year-old who’s in this audience today. March for the homeless man who’s in City Park today,”  spoke Mayor Hancock.

Simultaneously, a protest jointly organized by Black Lives Matter 5280 and Colorado Poor People’s Campaign took place some 150 feet away. There, a crowd of 100 listened to speakers lambasting the Hancock administration for its treatment of Denver’s homeless population.

While a local judge ruled the ban unconstitutional, the Hancock administration contests the ruling. Because the city lacks adequate housing for its homeless population, Denver County Judge Johnny Barajas ruled against the ban on December 27.

Shortly after, the Denver City Attorney’s Office stated it would resume enforcement, regardless of the ruling.

Monday’s protest demonstrates a rising tide of activism clashing with Democratic politicians viewed as lacking adequate progressive policy. Some defined the contrast between the two competing commemorations as the difference between talk and action.

SUV Crashes and Rolls Over After Being Shot At