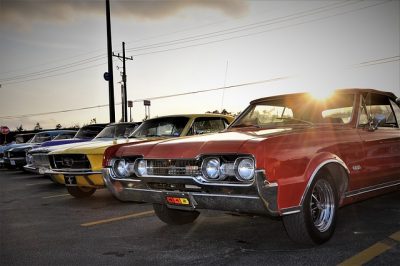 Muscle Cars are a staple in, not only manufacturing culture but American culture as well. They’re as American as apple pie, fighter jets, rock and roll, and the three main colors that every citizen bleeds: Red, white and blue. The introduction of the muscle car set America apart from its European rivals. It changed how consumers bought sports cars and enabled the “everyman” to have one. We put together a little history for the “Pony Car” lovers out there.

In 1964, Ford released the Mustang. This struck the American market like a match in a gas tank. Upon its release, Ford expected the Mustang to sell approximately 100,00 units in its first year. Little did they know, that by the end of day-1, they would have 22,000 orders. By the end of the first year, American’s loved the idea of having a sports car that they could afford, that the motor company sold over 400,000 units. Ford set the start for what was known at the time as “Pony Cars”. They were small, sporty vehicles that could “Gallup”. Pretty soon, other American manufacturers hopped on the bandwagon. Either converting other cars to fit the style and performance of the new sports industry or completely inventing their own version, Ford now had competition. The race was on.

With Ford now leading the race in American sports cars, other manufacturers such as Chevy (who had a mainstay in its Corvette line), Plymouth, Dodge, and Pontiac had to enter the race. Each car manufacturer designed their own version of the pony car…but with a far greater engine. Thus the “pony” moved into the “muscle”. Muscle cars became the mainstay for American sports cars throughout the ’70s. Cars like the Camaro, The Baracuda, The Challenger/Charger series and the GTO/Firebird were all developed at this time. Each one putting out more engine power than the rest.

Muscle Cars through the ’70s: A victory Lap the Keeps on Going

From 1969 to the end of the ’70s, the muscle car explosion defined what it was to be an American sports car enthusiast. Car shows where everyone would “flex” their muscle and show off the hard work and grit that went into their cars became a staple in every town. Even more so today, with the re-invention of the classic auto, thousands of individuals still gather to show off what they have done to make their muscles bigger.

Do you have a Muscle Car that Needs Shipping?

Moving to another state? Or do you need your car sent to an auto show far away? No worries! We have an excellent exotic car transportation program. From BMW’s to Ferrari’s to even GTO40’s, we’ve shipped them all! We will make sure your vehicle gets to its destination safe and sound and hassle-free! Contact us today and see how we can help!

Lexus and Toyota Vs. Tesla Vs. General Motors For Level 2 Autonomy

Pull Over, Folks! Your Participation is Required