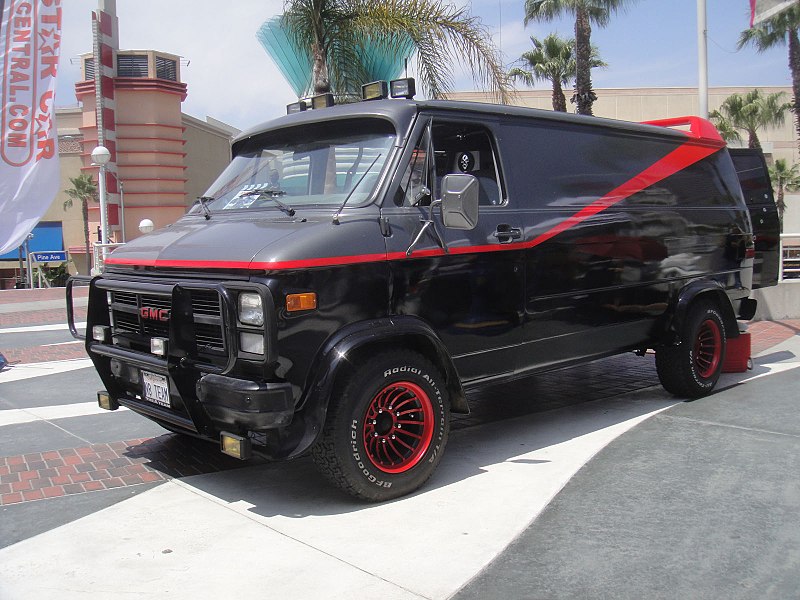 The GMC Vandura was presented as one of the most iconic vans of the time. Driven by B.A Baracus (Mr. T), and assisting the crazy over-the-top 80’s adventures that his team would go through, the van became an icon of the ’80s.

The GMC Vandura: Black With A Red Stripe

For the A-team, you had B.A. Baracus, Hannibal, Faceman, and Howlin’ Mad. On top of the 4-man power-team, you also had THE VAN. Driven by Mr. T, it appeared in every episode of all 5 seasons.

The van had your standard layout. With production on the set, they needed three for regular shots and 6 extra vans were brought in for stunts. Due to the time, budgeting constraints and various other factors, there are countless continuity errors. Careful watchers would notice that in some scenes where the van is driving or it has a member of the team sticking out, there would be a sunroof, where in the next scene where the van might flip or an overhead shot was taken, there would be a hardtop. These are simple inconsistencies, but a devout fan could pick up on it.

Die-hard fans will also point out that throughout all 5 seasons, the GMC was replaced by various other vans. These were the 6 stunt vans that the team pulled in. Where in one shot the van would be bursting through trees or barrels or whatever with guns blazing, when it came time for the van to perform a crash or roll-over, then it would be replaced by (most notably) a Ford E-Series. The Ford E-Series was more readily available, and parts to repair cut down on production costs, but if you looked closely, you could definitely tell it was a different van.

The Vandura would go on to become one of the best selling vans for those years. With many fans trying to recreate the original. This also helped to keep the “Van movement” alive through the ’80s where it started to falter due to oil embargos and industry shifts for vehicles that were smaller and had better gas mileage. Overall, the van is a classic.