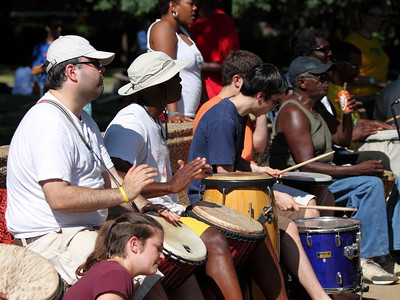 Everyone knows what a drum circle is. If you’ve ever been to a music festival, there’s a good chance that even you were a part of it.

Well, Denver is a pretty solid place for many hippies to gather. With legalization in full effect for the state, there has been an influx of jam-related occurrences.

Drum Circles Sprout Due To Lack Of Festivals

Due to closings from the COVID-19 global pandemic, large gatherings have been held off. Festivals have been closed and this does not bode well with a large scale community based off of love, light and positive energy.

Many have gathered despite the warnings of government officials. From every part of the city, dread locks and sage can be seen and smelled from the majority of the area. This is pretty typical for Denver, seeing the state is a hosts for countless festivals and events that encourage these good times.

The Gathering Intends To Spread Light

For many individuals, the present seems pretty bleak. Countless people are filing for unemployment, stores and businesses are closing, school is done for the summer. The idea of these drum circles is to ring aloud through the city.

Jimmy Dean, the founder of the circle had this to say:

“It’s not a traditional drum-circle concept where people are physically near each other and following a rhythm. It’s more of an in-theory concept to show support for creative industries. Drumming is a communicative tool in its most basic form. Even Morse Code is a form of drumming when you think about it.”

The process is a positive one. While many people are locked inside during the outbreak, there has been a tremendous out pour of community support for each other during this time.

Communities across the world have been shown to be partying from the balconies and playing music to show that the community is still active and continues to push forward during this troubling time.