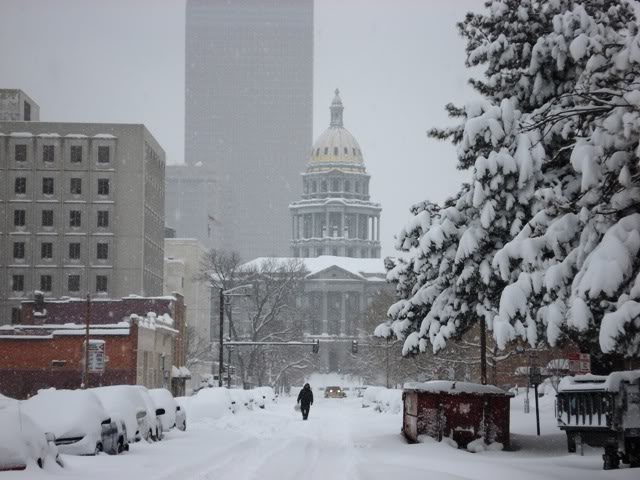 One of strongest March blizzards in Denver history has left the city. Now Denver has to deal with icy roads, cold weather and a foot of snow.

According to the official reports from the station at Denver International Airport, the city received 13.1 inches of snow. It is the 5th largest March snowstorm in Denver since 1800s when the record keeping started. As the temperature changed overnight, the snow turned into ice, making the roads a lot more dangerous. For that reason, a stretch of I-70 eastbound between Pecos Street and Federal Boulevard was closed to avoid accidents.

There also were closures on westbound I-70 between North Airpark Boulevard and Burlington, but the roads were reopened.

On Thursday snow plow drivers will place deicing materials on the streets of Denver where needed. There is also a problem with power outages, as there were about 26,000 people without power at 8:30 AM, according to Xcel Energy. They plan to bring most of the power back by late Thursday with the help of 800 workers.

The temperatures are expected to boost into the 40s, but because of the snow, it will probably not feel that warm.

More snow (2-6 inches) is expected in Denver, as well as in Boulder and Fort Collins, between Friday night and early Saturday.

On Sunday during Easter sunrise services the temperature is expected to be in the 20s, but the sky should be clear. During the day it will be sunny, and the temperature will boost into the 50s.

Next week Denver citizens can expect sunshine and the temperatures going back to the 60s.

88-Year-Old Woman’s Death is a Homicide:Daughter Accused for Neglect