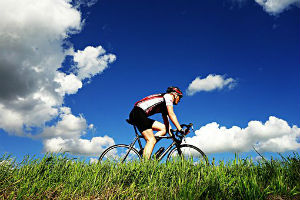 DENVER, CO – An area family is eager and hopeful that the community can aid them in locating the driver who hit and severely injured their loved one. The man was struck while he simply biking home.

Gloria Liu suggests this possibility has been like a nagging concern each time she says goodbye to her fiancé when he goes out for a bike ride.

“That’s a phone call that you’re always afraid you’re going to get: when your loved one walks out the door for their bike ride to do the thing they love,” Liu said.

Unfortunately, last Saturday night, Liu received that dreaded call. Colorado State Patrol let her know that her fiancé Andrew Bernstein was hit by a vehicle while biking to Boulder along Highway 7. The police also informed her that the driver of the vehicle fled the scene.

“it devastates us,” Liu said. “We don’t understand how anybody could do that. That someone cared so little for his life. The driver hit Andrew at such high speed, with such violence, that his bike was snapped in half.”

Apparently, somebody witnessed Bernstein on the side of the road and called for help. Bernstein then was taken immediately to Denver Health Medical Center where he is listed as in critical condition.

Liu said, “He has body-wide injuries that are too long to list.”

Bernstein’s father, Alan, emphasized how much his son loves being on a bike. He also pointed out that Alan essentially grew up on a bike.

According to police detectives, Bernstein may have been hit by a 2000 Dodge Ram van that should have damage to front of the car. Police are asking that anyone with information regarding the crash to call Colorado State Patrol at (303) 239-4501.