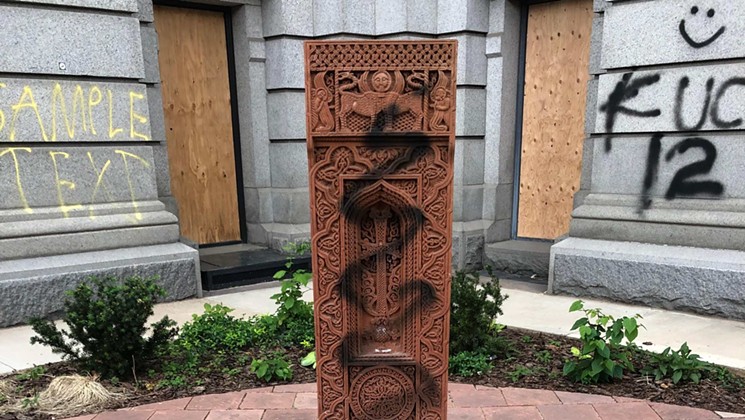 A monument dedicated to the awareness of the Armenian Genocide has been defaced by rioters. This comes during a time of national unrest over the actions of Police and the unnecessary force used against the African American Community.

The monument is a reminder to the genocide which claimed over 1.5 million lives. The genocide started over 100 years ago and continues to be a staple in the tragic empowerment of governments.

The event was one of the worst in the history of the world. With many Armenians being murdered in unspeakable ways.

Unfortunately, the nation is quickly finding out that many of these rioters are part of a network of mayhem instigators.

Armenian of Colorado Speaks Out

“Protest leaders have repeatedly denounced violence and vandalism. We do not hold the peaceful protesters responsible for the behavior of violent individuals,” said the Armenian of Colorado statement.

“As Armenian Americans, a community that has survived genocide and centuries of oppression, we recognize and condemn the ongoing injustices against our African American community and we join them in calling for justice for George Floyd,” added the statement.

While many are often too quick to forget about what happened, or uneducated about the event, the Armenian people have not forgotten. The defacing of the monument raises questions.

The first is that many Armenians understand the issues of tyrannical power and the use of segregation and genocide. It might be that vandals are looking to further cause hysteria than support the current protests.

Regardless, the Armenian community within Colorado has made it clear that the attack on their monument was not an act by protesters, but by the hands of those looking to make things worse.

ANTIFA Use Protest To Cause Disruption

Over the past few days of the ongoing protest, society has seen large-scale police force as well as rioting and looting. With increase reports of white -males being the cause for much of the increased looting and rioting – the focus has gone from the protests to looting.

Teenager Shot in Shooting Near McDonald’s in Denver