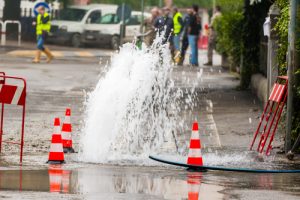 SHERIDAN, Colorado — A severe thunderstorm brought heavy rain and hail to the south metro area of Denver on Tuesday evening.

It also contributed to a sinkhole on Oxford Avenue and an SUV was swallowed by that.

Sheridan Police Chief Mark Campbell said a sinkhole swallowed an SUV just east of Natches Court. Campbell said the driver made it out OK just before the vehicle fell into the hole.

The deluge caused street flooding in some neighborhoods, including the area of South Santa Fe Drive and West Oxford Avenue where cars were reported stranded at the underpass.

In June 2015, a Sheridan police sergeant’s SUV went into a massive sinkhole near where Tuesday’s sinkhole formed.

Powerful winds brought down trees near South Broadway and Evans Avenue, as well as near Porter Hospital at South Downing Street and East Yale Avenue and across the street from Swedish Medical Center at South Logan Street and East Girard Avenue in Englewood.

Xcel Energy reported more than 200 power outages affecting 13,000 customers in the metro area after the storm.

Hail was reported in Littleton, Englewood and the southwest parts of the metro area.