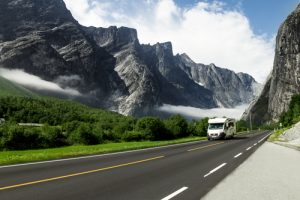 It’s a memorable part of the mountain drive for all the wrong reasons. You’re cruising along with 3 westbound lanes until you hit that curve at the bottom of Floyd Hill.

Micheal Lewis, executive director of the Colorado Department of Transportation, said that it has to be narrowed to 2 lanes and then traversed the sharp corner at the bottom of the hill.

Lewis joined other transportation leaders and local elected officials Tuesday to talk about plans to improve a congested stretch of the busy interstate. CDOT held the press conference below the bridge at the Interstate 70 and U.S. 6 interchange.

“This bridge above us has been in service as long as the interstate has been active here,” Lewis said. “It’s been on our list of structurally deficient bridges and actually needs to be replaced.”

CDOT is considering a concept that would remove the bridge. Crews would bore a half-mile-long tunnel through Floyd Hill and create a third westbound lane all the way to the Veterans Memorial Tunnels. The plan would reconfigure the section of I-70 with simpler curves, bridges, and walls to improve the line of sight for drivers.

It would also complete a portion of the shared-use trail from the Clear Creek Greenway toward the Peaks to Plains Trail in Jefferson County.

The project Lewis called “critical” is also expensive. CDOT currently does not have the funds to pay for the $550 million plan. Lewis said CDOT has a backlog of projects totaling $10 billion. The $2 billion dollars lawmakers recently set aside for transportation projects may help along with future ballot initiatives.

In the meantime, CDOT is proposing an $80 million plan to create a peak-period shoulder lane on westbound I-70 from the Veterans Memorial Tunnels to Empire. The toll lane would be similar to the eastbound I-70 Mountain Express Lane that opened a few years ago. Lewis said construction on the lane could begin as early as spring 2019.

If funding were secured today for the Floyd Hill tunnel project, Lewis said it would still be a couple years before crews could begin work.

How to Keep a Healthy Schedule While On the Road

Want to Cut Your Own Christmas Tree? Here is Some Permit Information for Denver